I met up with Glen through the Slambox Facebook group and the guys over at Slambox decided they wanted to do a nice little feature on this vert as it is only a handful of E36 Vert’s on Air ride. So we went around sorting a shoot out and decided to do it when I was on my way back up from London after getting some new wheels for my very of E36 Budget build. We were quite unlucky with the weather as it was uncertain if we could do the shoot due to rain and lack of undercover locations, but as it came close to the time it brightened up abit and decided to meet up and go and clean the car and see about shooting it. So after the clean we went to a little remote location but after getting a couple of flash shots it started to rain so we decided to pack up and go to a undercover location and do the shoot. 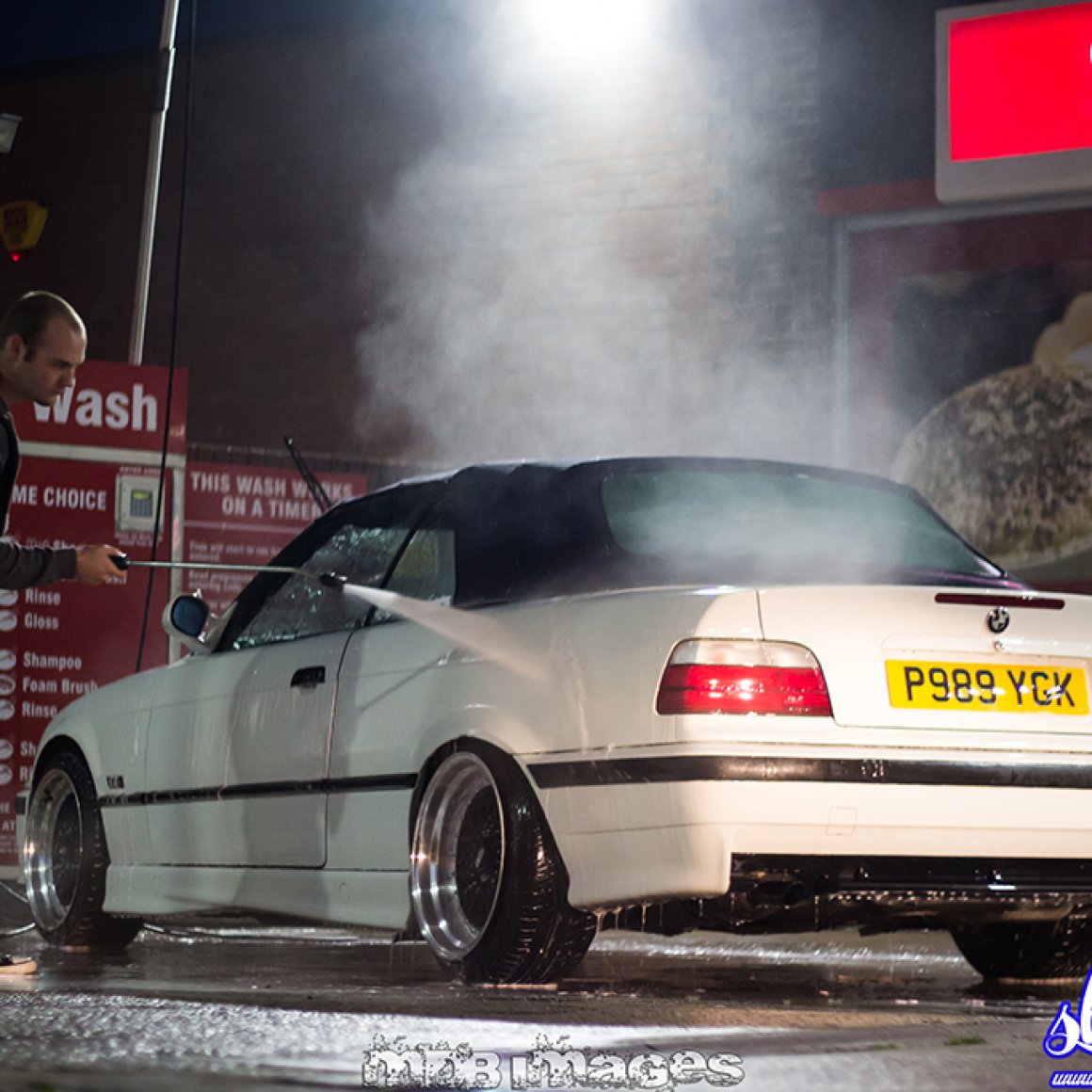 Glen bought this car very cheap as he was offered it by a friend of a friend as it needed some work and Glen was in the market for new project. It is a BMW E36 318i Convertible with manual moving roof, it came with the M3 front bumper on but apart from that was basically standard. When he started building it he decided that he was going to keep the costs as low as possible so went on the search for low cost parts and came back with everything including coilovers, wheels & tyres, bumpers and painting for just over £1000. The car was ran for quite a while very low on coilovers but this came an daily issue for where he lived so he knew he had to go Air Ride but it just wasnt in the budget, but then he got lucky as a friend was splitting their E36 including the Air so Glen jumped at the chance to get the front setup and went about fitting it and has left the back on coilovers for now. 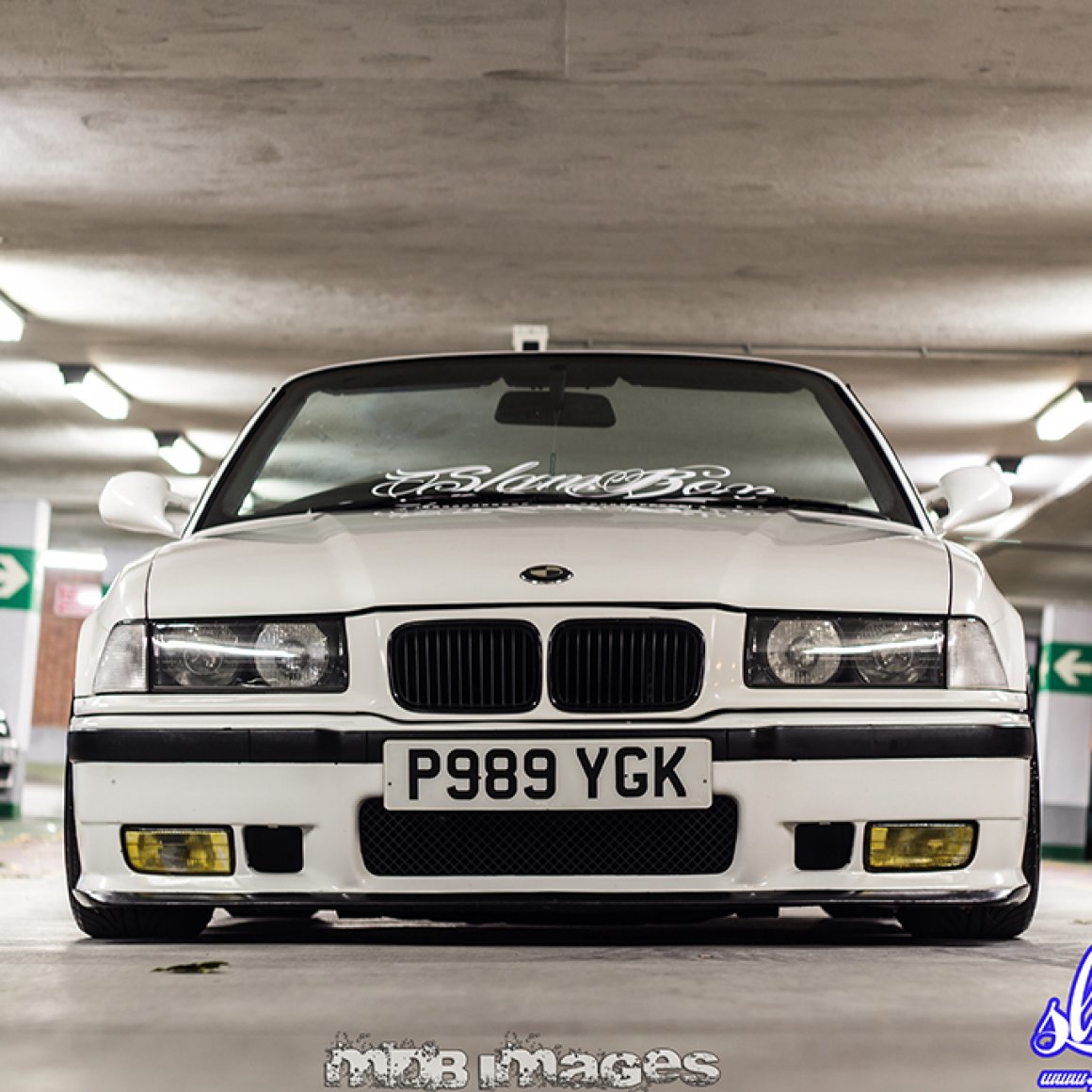 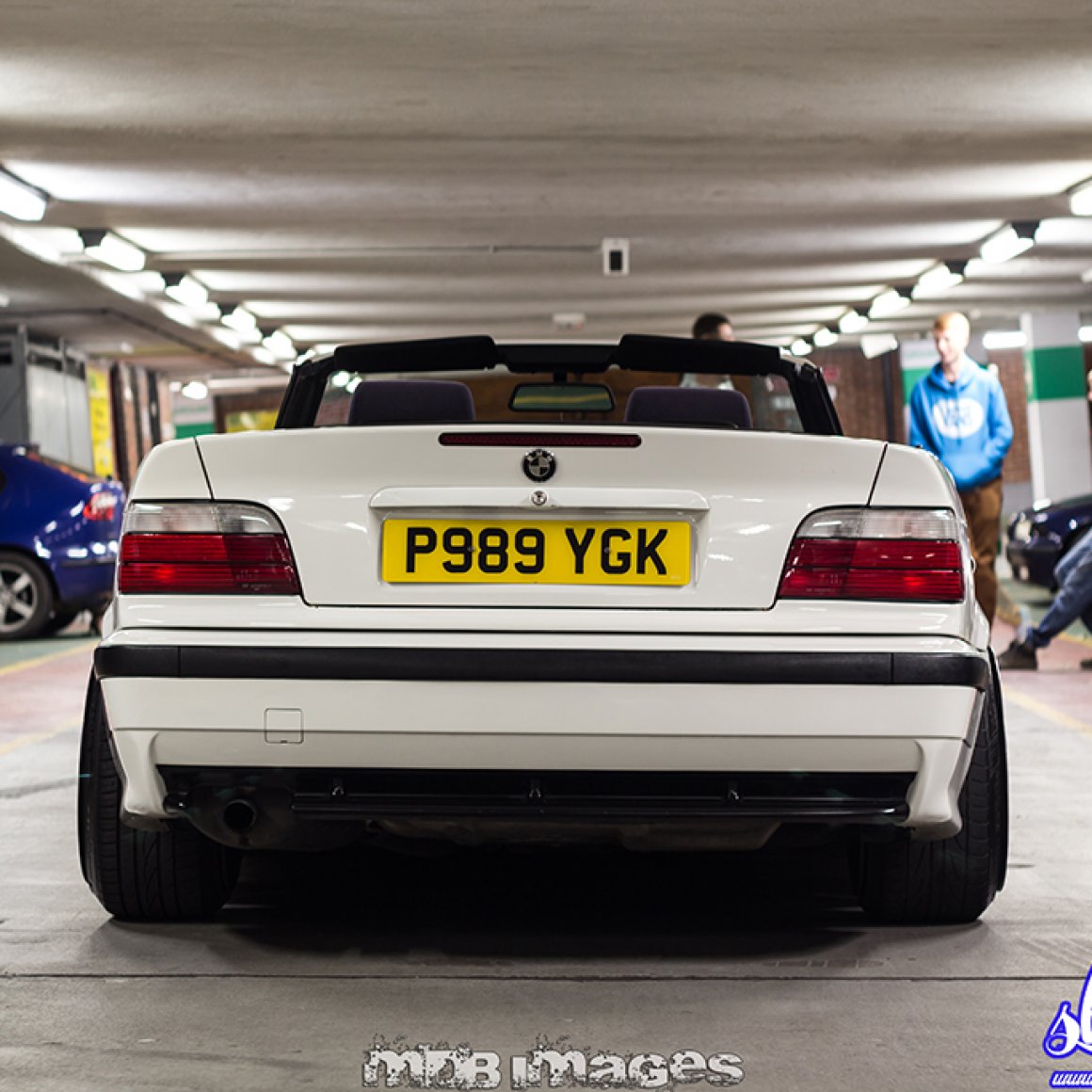 The Car is sitting on D-Lux BBS RS Replicas which are 17″x8.5J ET25 fronts which are wrapped in 205/40’s and 17″x10J ET25 Rears which are wrapped in 215/45’s, this gives the car some width and aggressive look with the fronts just tucking and rears poking. To get the rear wheels to sit right in the arch they arches had to be rolled to stop the rubbing as some damage had been done with tyre and arch meeting. To add to the look it has a full Mtech kit (front, rear, mirrors and skirts) and yellow painted fogs for abit of a retro look. Glen also has done some little touches with Genuine Carbon Fibre front and Rear BMW Badges and put and M3 Steering wheel inside with a little sub in the boot. 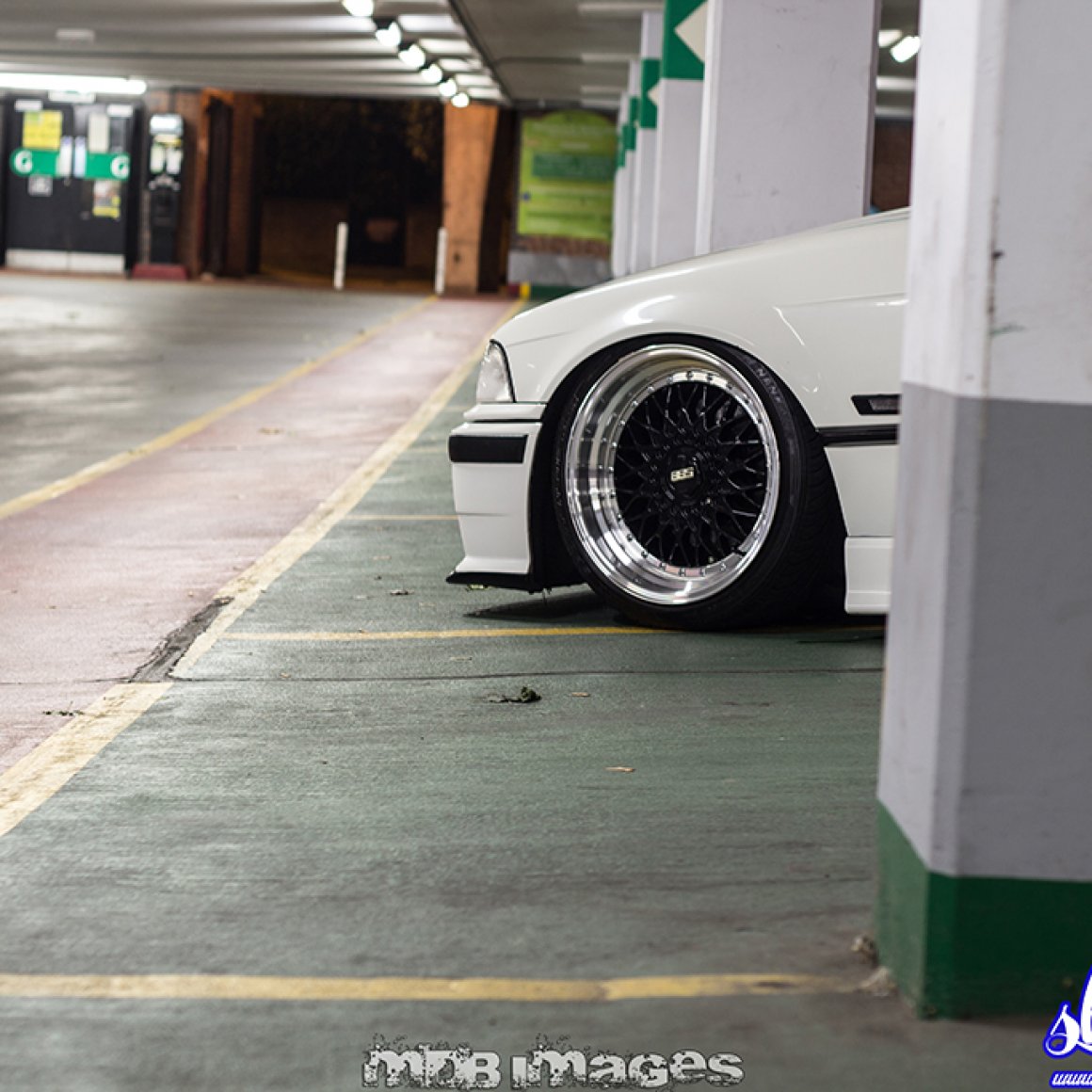 The car was built by Glen, his brother and Friends and it shows you just what you can do on a budget and you dont have to spend a lot of money to make a nice looking car.
“Big thanks to the guys at Simons Accident Repair Centre, who did all archs and sorted all the painting, Travis, Ross, Scott and everyone that has helped me build the car”. – Glen 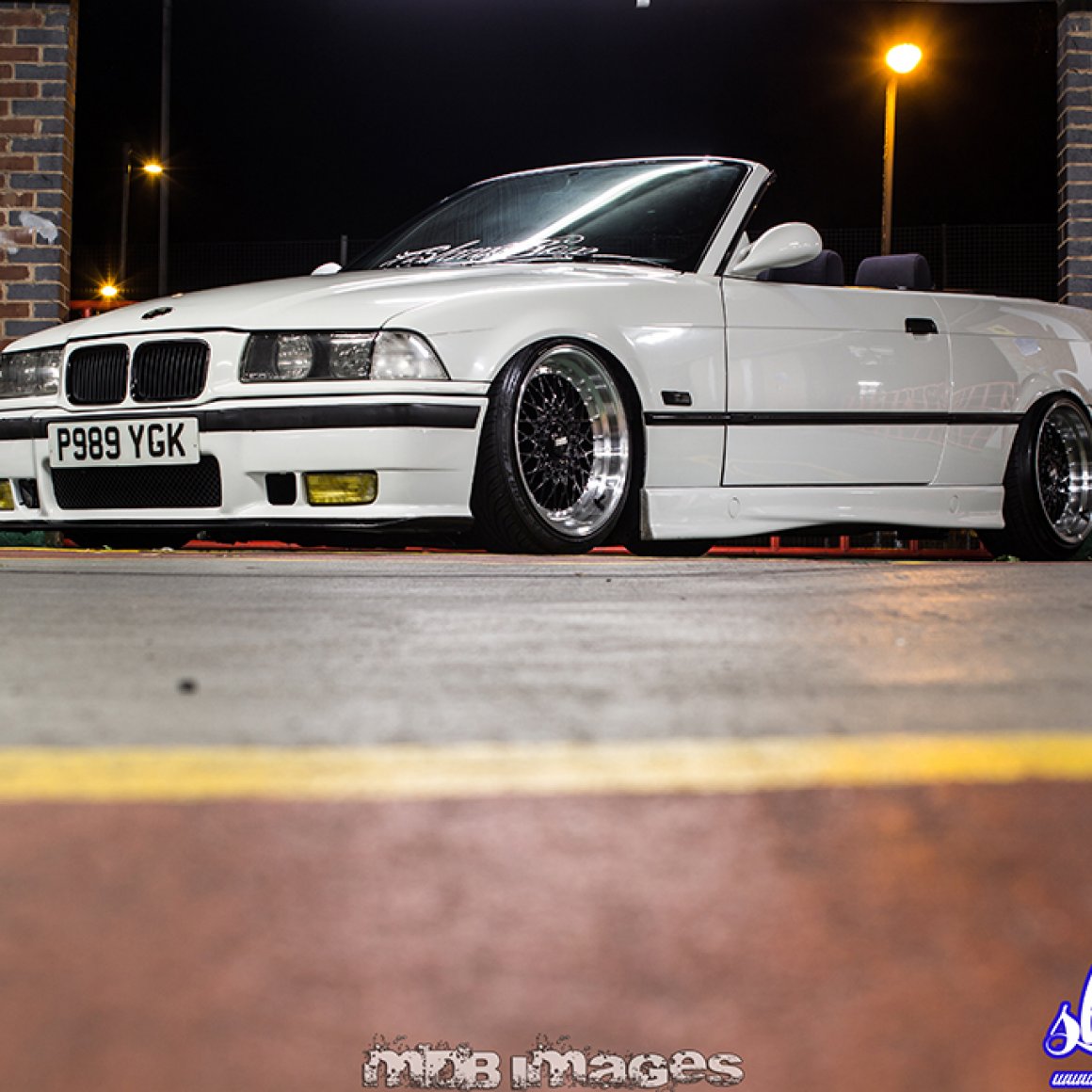 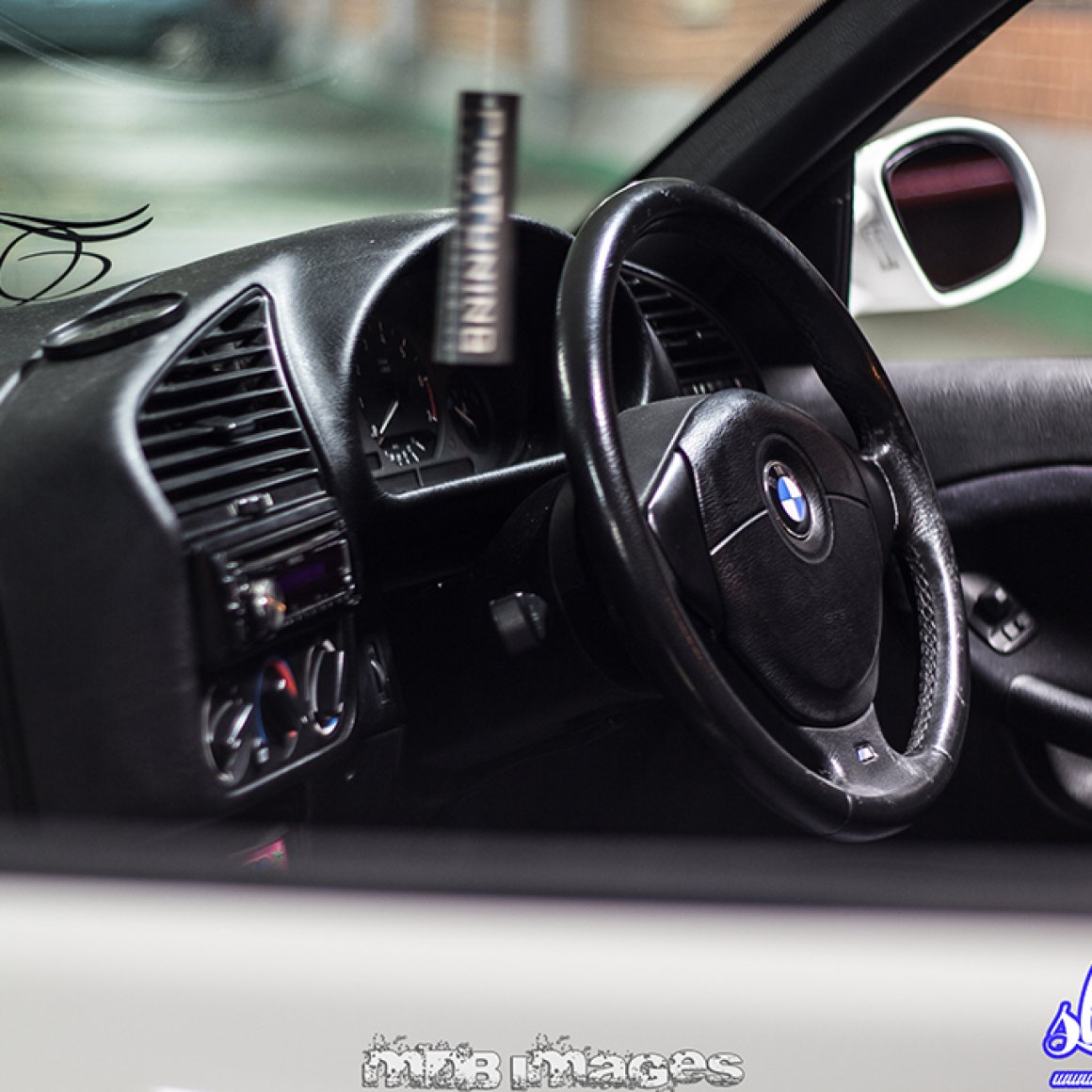